The COVID-19 global pandemic has exposed and exacerbated myriad intersecting social inequities, including racism and anti-Blackness, food and housing insecurity, ableism, and anti-LGBTQ+ sentiment. Most recently, violence perpetrated against Asian and Asian American communities has reached crisis proportions. Colleges and universities have a responsibility to call out these intersecting crises and to provide resources for learning and for community care.

Since the beginning of the COVID-19 global pandemic, many of us of Asian ancestry have either witnessed, experienced, or known someone impacted by anti-Asian violence or intimidation. From March 19, 2020 to February 28, 2021, 3,795 reports of anti-Asian hate incidents were received by the Stop AAPI Hate Reporting Center. While deeply disturbing, anti-Asian hatred is nothing new. In fact, in the United States, racism against Asian Americans is as old as the Naturalization Act of 1790 and as contemporary as today’s social media posts.

One of the earliest pieces of federal legislation passed by the new US Congress, was the Naturalization Act (sometimes known as the “Nationality Act”) of 1790. This law restricted the naturalization rights to “free white persons.” In reality, that meant that naturalized citizenship was limited to white, land-owning men. Without the right to become a US citizen, Asian immigrants were deprived of the right to vote. Without the right to vote, Asian immigrants could not elect policy makers to represent their interests and protect them from discriminatory laws. A long line of anti-Asian laws and orders, fueled by racism and enabled by a lack of political representation and a failure of the political leaders of the time, followed: the Chinese Exclusion Act of 1882, which banned immigrants from China; alien land laws enacted by fifteen states outlawed the sale and leasing of property to Asian immigrants, i.e., “aliens ineligible for citizenship” and Executive Order 9066, which authorized the forced removal and mass incarceration of over 120,000 people of Japanese ancestry, most of whom were US citizens. The history of anti-Asian policies reflects the deep-seated, virulent racism against Asians/Asian Americans in the US.

My family’s history followed a similar arc. My mother’s parents came to the US in the early 1900’s. They spent most of their adult lives in the US, and for most of that time they were considered by the government to be “aliens ineligible for citizenship.” They managed to hand-clear enough land to start a farm in Yakima, Washington. The farm and family began to grow until the state legislature passed alien land laws that forced them off the property they were leasing. They became sharecroppers, following the crops across the Yakima Valley. Slowly, they began to regain an economic foothold until the beginning of World War II, when President Roosevelt signed Executive Order 9066. My mother and her family were forcibly removed and sent to Portland where they were held for three months until a more permanent concentration camp could be constructed in Wyoming. She and her family were transferred to Heart Mountain, Wyoming where they remained until the end of the war. Most immigrant families have to “start over” when they arrive in the US. Anti-Asian racism forced my mother’s family to start over, three times. 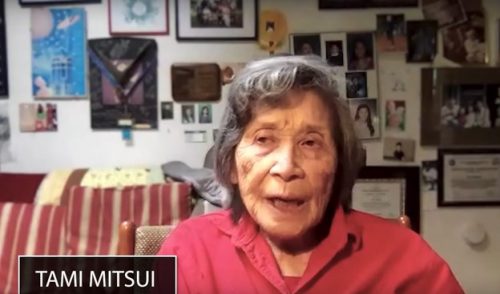 I was fortunate to have a mother who made sure that her children knew what happened to her and that it was not her fault. Rather, it was a failure of our government and political leadership to protect her rights. This knowledge helped me to understand the systemic nature of anti-Asian discrimination and how this unjust governmental action reflected the will of the majority in our country. This knowledge also helped prevent me from internalizing the racism that led to Executive Order 9066 and seeing a larger connection to discrimination against BIPOC communities in general. In fact, this familial example of “talking story,” of sharing the often-unspoken past, also underscores the power and importance of studying histories that have been hidden for far too long.

One important way of addressing and countering anti-Asian animus is by decolonizing our curricula and supporting culturally responsive and culturally sustaining pedagogies. Courses on Asian American history, for instance, can have a life-changing impact on Asian American students–and help to improve understanding for other learners. When the lives of our AAPI students become the texts for the classes our institutions offer, we elevate the hidden contributions of Asian Americans to our nation and help counter the invisibility in which our lives are often cloaked. Normalizing the study of Asian America is a powerful, long term way of countering Asian American hate.

Additionally, communications from the college or university president can both signal and amplify institutional values. During this year of intersecting and cascading social and public health crises, I wrote weekly messages to our College community. I also strategically partnered with PCC’s Chief Diversity Officer to issue joint statements of solidarity and to provide local resources. In 2021, the college recognized the Day of Remembrance (of Executive Order 9066) by creating and posting a video concerning human rights and the U.S. Constitution. It also featured an interview that I conducted with my mom about her experiences during her family’s imprisonment and experiences of Anti-Asian animus.

Joining coalitions and engaging our communities reinforces our institutional commitments and can also underscore our mission and values. The National Asian Pacific Islander Council is a coalition of AAPI community college leaders that is focused on equity. We partnered with our sibling organizations, the National Council on Black American Affairs and the National Community College Hispanic Council to issue a joint statement on anti-Asian hate.

In fact, many organizations across the country are speaking up and speaking out to raise awareness of the rise of anti-Asian violence and many of these organizations have long been on the forefront of Asian American empowerment (e.g., Asian Americans Advancing Justice, the Japanese American Citizen’s League, are just a couple of many examples). Here in Portland, several organizations, including Portland Community College, are supporting Rise Against Hate, Oregon to demonstrate solidarity in the face of regional anti-Asian incidents.

The long term impact of the 1790 Naturalization Act is gradually being reversed as the AAPI community expands and our electoral power grows. For example, the Congressional Asian Pacfic American Caucus is giving voice to the struggles and equity barriers AAPIs face in this country. Two members of CAPAC, Senator Mazie Hirono and Congresswoman Grace Meng, recently moved a bipartisan COVID-19 Hate Crimes Act through the Senate.Â  In the White House, President Biden issued aÂ  Presidential Memorandum condemning and combating racism, xenophobia and intolerance against AAPIs. Policy changes requiring disaggregation of AAPI data are leading to a dismantling of the Model Minority Myth. This myth posits that AAPIs do not experience racism or struggle economically or educationally. This myth has also been used as a wedge against BIPOC solidarity and helps explain why minority serving institution status for colleges that serve low-income AAPI students did not occur until 2007. Political engagement has had an impact and is more important now than ever.

Anti-Asian hate has a long and troubled past in the US, and continues to this day. What can differentiate this time from others is the willingness of communities and educational institutions to speak up, unite, educate and mobilize in order to say “Not in this town, not in this college, not here, not now, not ever.”